With the upcoming election, people have started asking me about the effects that it will have on the stock market. With so much craziness going on this year, I’m happy to tell you that this isn’t something that you need to worry about. Historically, elections haven’t had much effect on the stock market and neither has the political party in power.

Since 1926, the US stock market has returned about 10% per year. In election years, it has been up a little bit more, averaging 11.3%. In fact, of the 23 presidential elections that have taken place in the United States since 1926, the market has only been down in 4 of those years, which is only about 17% of the time.

During the election years when the market was down, there were much bigger forces at play than just politics. The market lost 8.2% for the year in 1932 when Roosevelt ran against Hoover. That was also near the height of the great depression, which had started long before the campaigning began. The market lost 9.8% in 1940 when Roosevelt ran against Willkie. However, the world was also at war as Hitler’s Germany tried to take over all of Europe.

More recently, in the year 2000, Bush was running against Gore and the stock market dropped 9.1%. But that spring, 8 months before any voting took place, Japan entered a recession and the “dot com bubble” burst. Another bubble’s bursting just happened to coincide with the 2008 election when Obama ran against McCain. When the housing bubble burst, it sent markets into a freefall which resulted in a 37% loss that election year. As you can see, there were much more serious and far-reaching issues at play during these years than just a presidential election.

Historical Returns Based On Political Parties In Power

If the election itself doesn’t sway the stock market, then surely the political party that gains power does, right? That is a common assumption and entirely unfounded. As you can see from the graph below, it appears that the stock market pretty much just likes to go up no matter which party wins the presidency. This shows the growth of a dollar invested in the S&P 500 Index from January 1926 to December 2019. 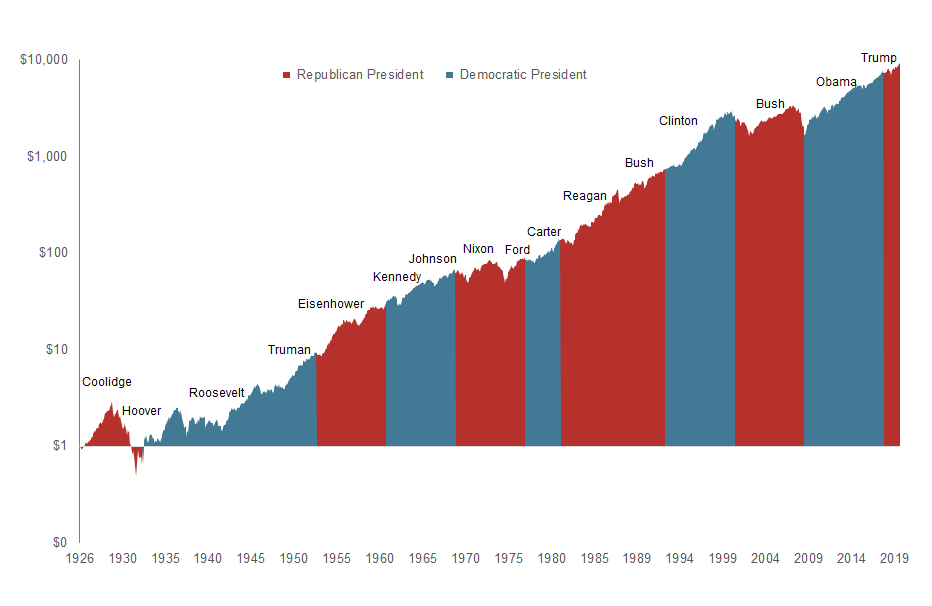 The US President doesn’t have as much power as many believe because of the checks and balances built into the system. Congress is the one that actually gets to make the laws, after all. The following graph again shows the hypothetical growth of $1 invested in the S&P 500 Index, but this time colored based on which party had control of Congress. 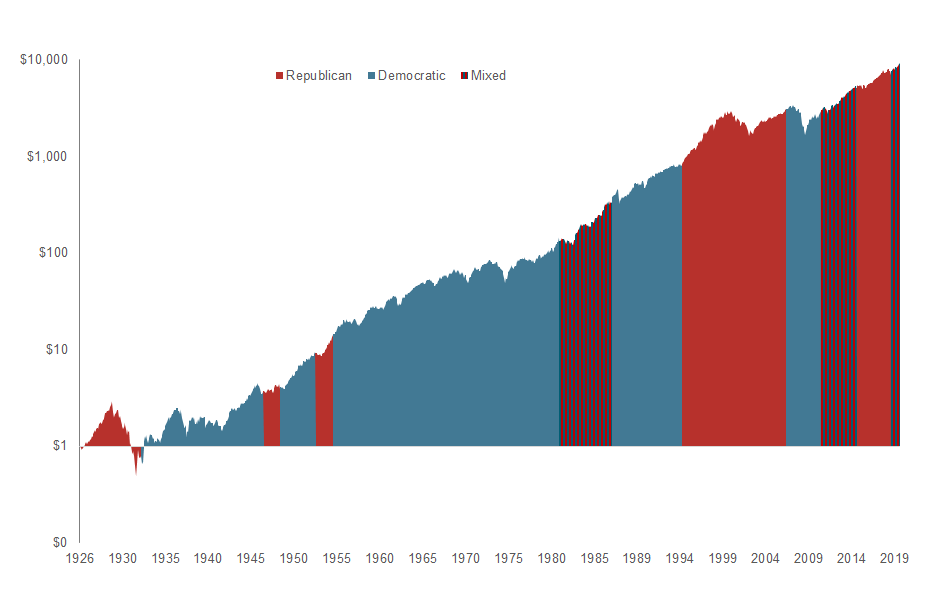 The Real Risk During An Election Year

I’m just going to put my money somewhere safe until I see what happens.

I want to pull out of the market until things calm down.

Those are common sentiments about this time during an election year and with everything else that has been going on in 2020, you would be hard-pressed to find someone who hasn’t had one of those thoughts flit through their mind at least once. Those are dangerous thoughts, though.

When it comes to the stock market, past performance is no guarantee of future returns. Will the market go up or down for the remainder of the year? I don’t know. If you had asked me that in March, my answer would have been entirely wrong as I would have never guessed that we would see such an amazing recovery. How about the next two years or five years? Your guess is as good as mine.

That is why I do not advocate investing in the stock market for one, two, or five years. If you need your money during that time frame, you need to keep it somewhere safer. The stock market is a long-term investment, best for money that you won’t need for decades, like retirement funds. While I won’t dare to predict where the market will be at this time next year, I’m fairly confident that twenty years from today it will be higher. I could be wrong, but it has been up in every twenty-year period on record, which gives me hope.

Instead of worrying about the upcoming election, take a long-term perspective on your stock market investing. Don’t check your balance every day, or even every month. The short-term ups and downs will wear on your nerves and only build anxiety. If you look at the graphs above closely, you will see a lot of downturns in them. However, if you take a step back and look at the big picture it’s pretty clear what direction the market has gone over the last 95 years.

While it’s healthy to have a long-term perspective relative to your investments, it’s better to have an even longer-term perspective, an eternal one, relative to life itself. Where are you placing your trust? Even a robust stock market will never be enough. In today’s world, it’s important to raise our eyes above the chaos that surrounds us and place them on the Prince of Peace.

Are you looking for a professional who will guide you not only through the ups and downs of stock market investing, but as you live your life and manage your money from an eternal perspective? We can help. Schedule a free call so we can get to know each other and determine what kind of guidance would serve you best.

Guide Financial Planning is led by founder Ben Wacek, who is a Christian fee-only Certified Financial Planner™ and Certified Kingdom Advisor®. He has a passion to help people of all income levels make wise financial decisions and steward their resources from an eternal perspective using Biblical principles. Based in Minneapolis, MN, he works with clients both locally and virtually throughout the country and abroad. You can follow the links to learn more about Guide Financial Planning and our team and the services we offer.